We’ve all wondered at one time or other how Santa Claus could possibly deliver a present to every child in the world in one night.

Or what it is that gives reindeer the ability to fly?

How does Santa really know if we’ve been naughty or nice all year?

The mystery and magic of childhood makes Christmas more exciting and extraordinary.

Some people choose to believe in Santa Claus even though they know the conspiracies surrounding his authenticity.

Ah, but doesn’t Christmas bring back the memories and wonder of being a kid.

One Christmas Eve, I was waiting patiently for sleep to take me into a dreamland flowing with candy canes and enough Christmas magic to make my wishes come true, when I heard an odd noise outside.

At seven years old my imagination was unrestrained.

The chance Santa’s sleigh or reindeer hooves had made that noise was credible to me and I was eager to catch a glimpse of the jovial man with his huge red sack of presents or the sleigh with the reindeer patiently waiting his return.

If I could get even just a glimpse, the myths would be busted, I’d know the truth.

Swiftly moving my legs over the side of my bed I quietly edged to the door of my room and turned the knob, pushing it open as noiselessly as I could.

The hallway, dark, no sound, no scuffing of feet on the wooden floorboards, so I crept into the lounge room.

The glow of the tree lights warmed the room.

Butterflies fluttered inside my tummy would I catch Santa in the act?

The tree looked even more magical in the stillness of the night.

It appeared to have bloomed; the smell of pine needles was enchanting.

It stood taller, like a fresh shower of rain had made its branches reach towards the sky praising the clouds for the deliverance.

The presents under the tree had multiplied.

My inquisitive brain whirled at the realisation Santa could still be in the house.

My legs carried me back down the hallway faster than ever before.

Rounding the corner into the kitchen I flicked the light on, expecting a ‘Caught ya!’ moment but I was too late.

The glass of milk was empty.

All that remained of the chocolate chip cookies my siblings and I had left out were a few crumbs.

Momentarily, the skirmish in my head of belief and disbelief left me bewildered.

But the evidence spoke for itself, plain as the empty glass of milk in front of me.

I spun on my heels and raced for the back door.

“What are you doing up?”

It was my mother’s voice and she startled the near life out of me.

In all the excitement, my words tumbled over one another not making sense but sense enough for my mother to smile and place a hand tenderly on the middle of my back and usher me to the doorway of my room.

“Go to sleep, soon it will be Christmas morning.”

She placed a kiss on my forehead before swinging the door wide open.

She watched me climb into bed. 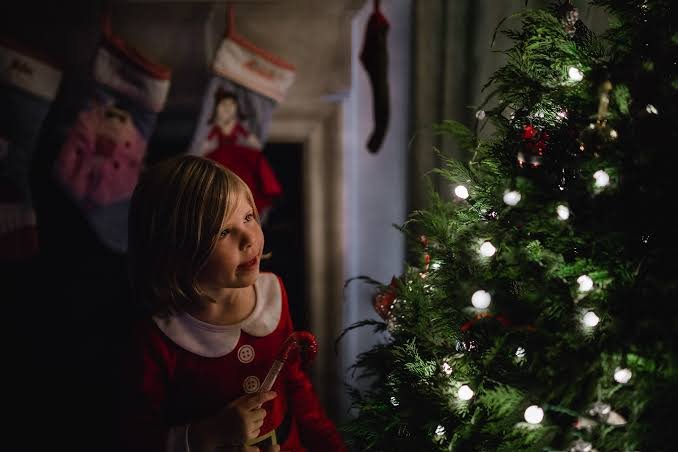 A loud commotion woke me from my sleep.

“Wake up Santa has been!”

I recognised my dad’s voice bellowing with excitement.

Without a second of hesitation, I bounded from my bed and sprinted into the lounge room.

My brother and sister jostled and bumped into me as we all hurried down the hallway like a pack of wild animals fighting over a carcass.

The feeling of excitement grew from the depths of my core until it felt like I would burst.

It seemed as though every fibre of my being was electrified with feverish enthusiasm.

I felt like I was going to explode with excitement.

With eyes, wide open and a kooky grin on our faces, the three of us stared at the spectacle in front of us.

Dad was sitting under the tree wearing a Santa hat surrounded by colourfully wrapped presents of different shapes and sizes.

The memory of this moment was etched by the artist in my brain, forever to recall.

Later that morning, I was playing with my new toys, when my brother grabbed my arm and pushed me out the front door.

“Look at this!” he pointed to the ground.

My eyes grew as wide as a basketball.

Right there in front of me, as real as the pine needles on the tree, were shoeprints.

Santa’s shoeprints! His boots in fact.

For what felt like the hundredth time, my brain back flipped leaving my body incapable of moving without causing chaos.

My arms and legs wavered like octopus’ tentacles as I hurtled towards the house to tell my parents.

Later in the quietness of my room, I reflected on the morning’s events.

The sound I had heard in the early hours of the morning. The cookie crumbs. The empty milk glass. The bootprints in the driveway leading to the house.

Santa was real; just as the wind was real, just as God was real.

You can’t see them, or touch or even smell them.

But all three can certainly leave an impression on you.

You just have to believe and the magic comes alive.

And that’s what Christmas is about is it not?

Believe in what fills your heart with joy and love this season.